Inside the Revolutionary Philadelphia Distilling

Philadelphia Distilling embodies the underdog spirit, leading a revolution for better cocktails and even better gin in the city of brotherly love. 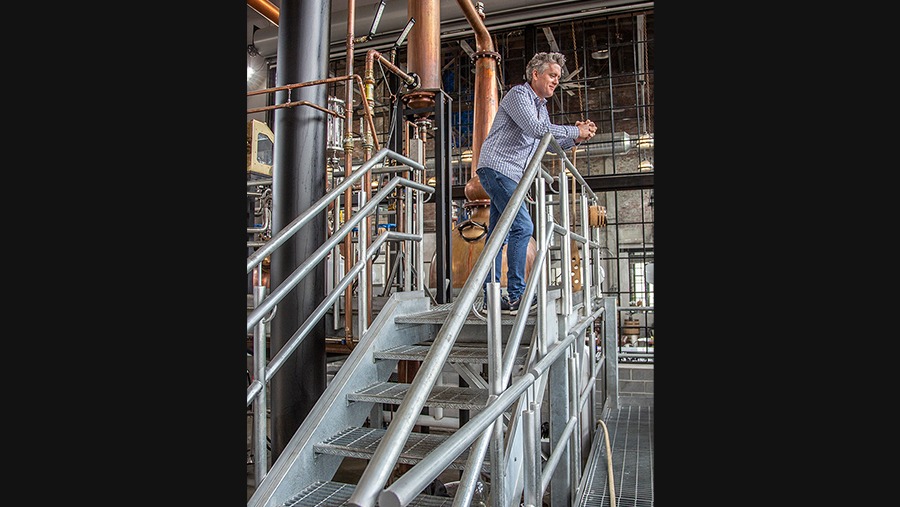 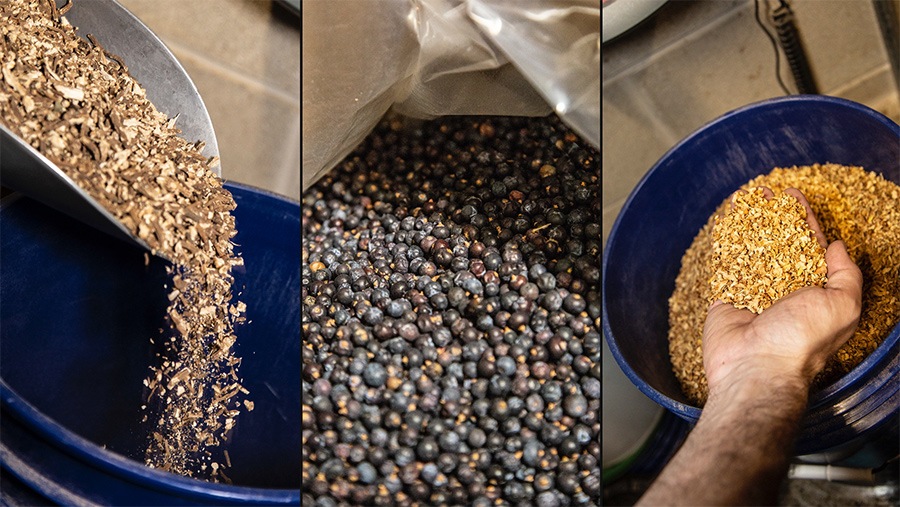 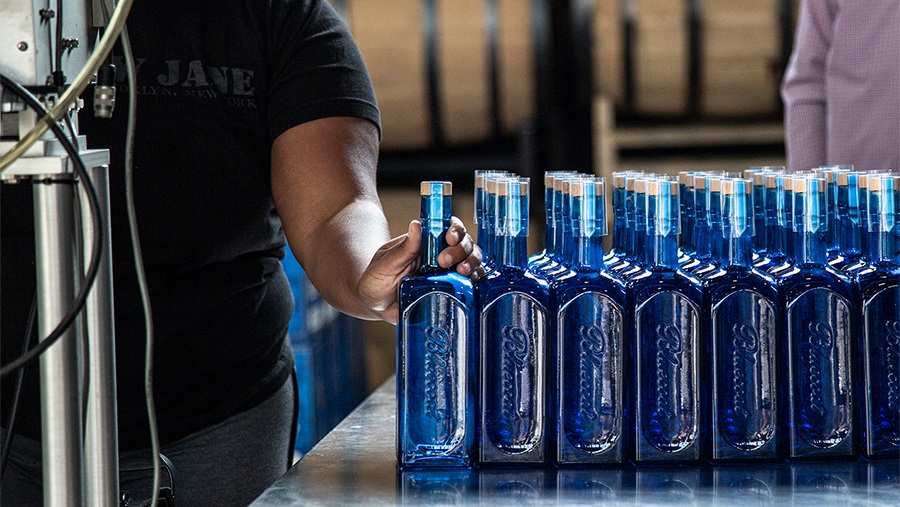 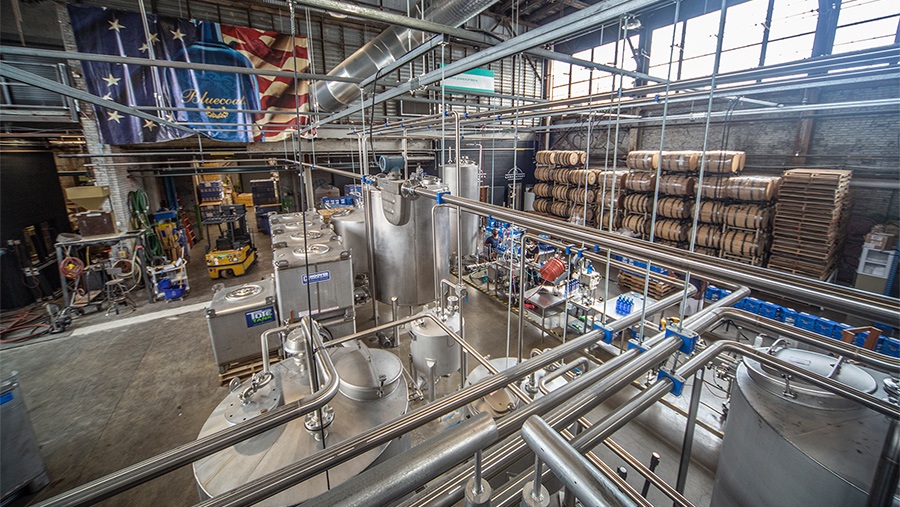 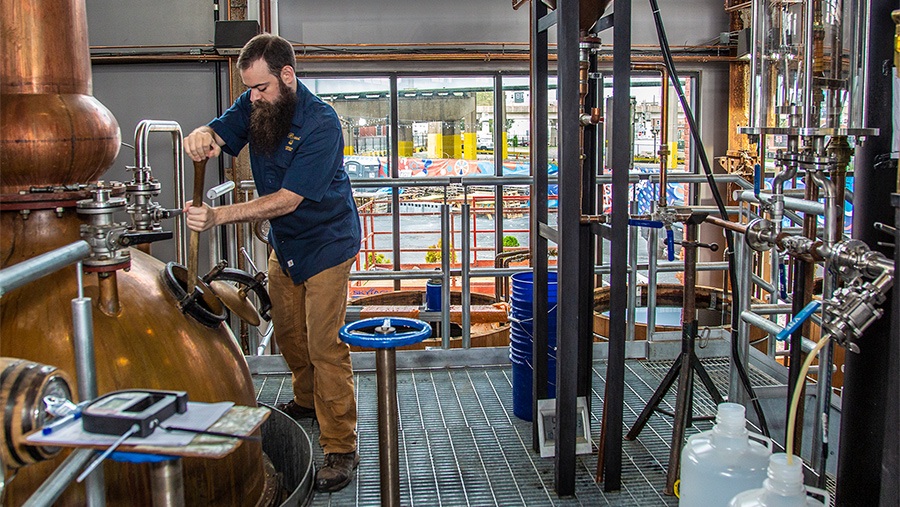 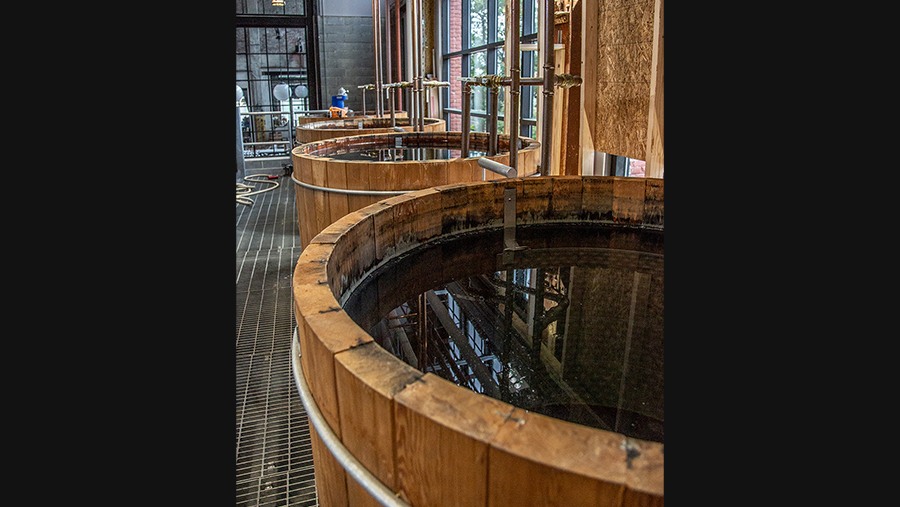 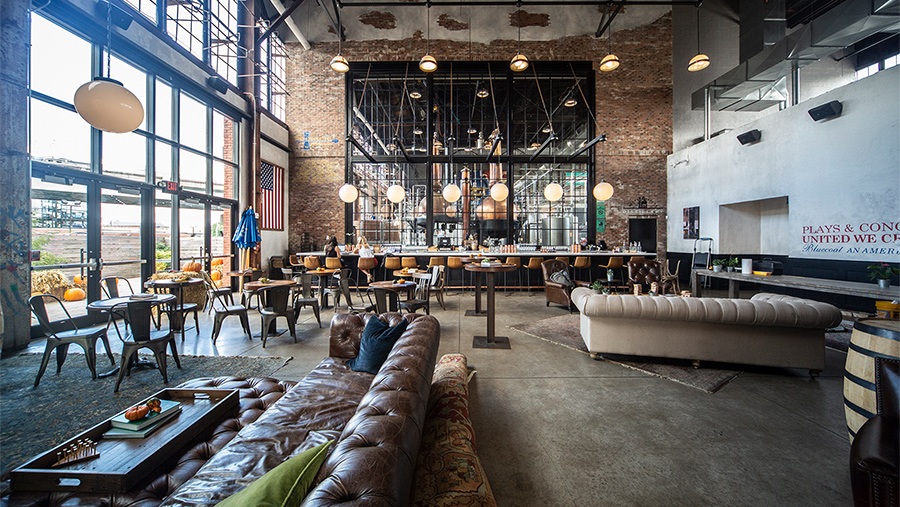 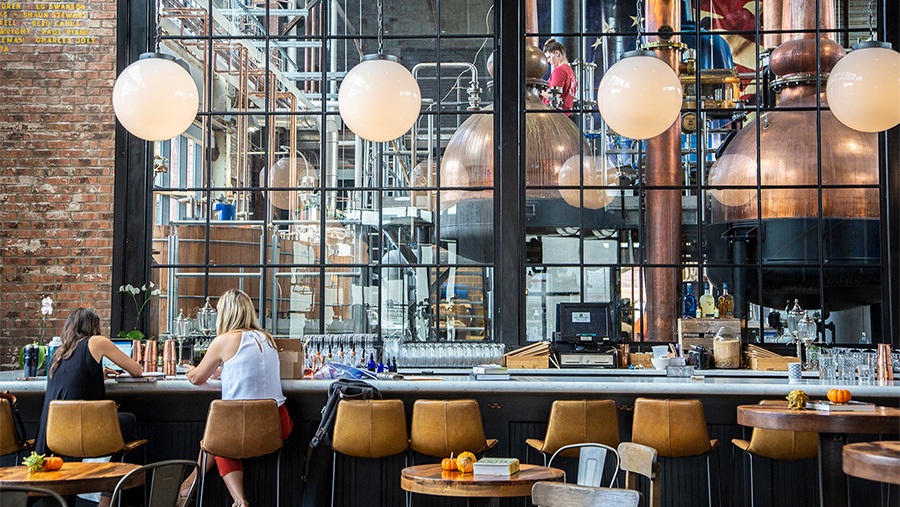 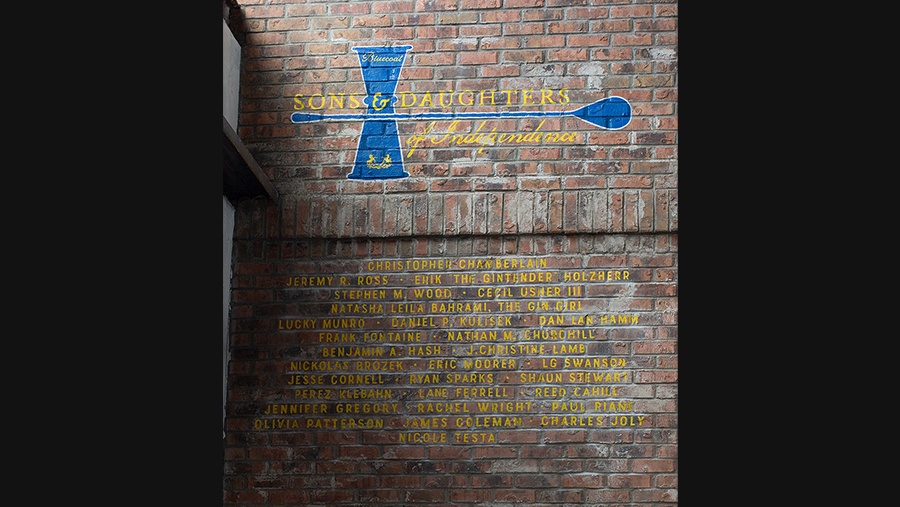 The Philadelphia-born Bluecoat that consumers learned to love wasn’t inspired by anything particularly patriotic. Instead, the idea came from south of the border.

“Honestly, we were thinking about brands like Corona and how people customarily add a lime to their beer, and consumers’ interest in products like lime-flavored Doritos,” owner Andrew Auwerda said. “The more we thought about, the more we realized that Americans really liked limes and citrus.”

“That got us thinking about how consumers add a lime to their gin and tonics,” Auwerda said. “Our head distiller at the time, Robert, was critical of things like that. 'Why do they need to do that step? Why don't we infuse citrus right there?'”

“Obviously we didn't go with lime. We instead went with sweet orange peel and lemon peel as our citrus infusions, but that’s where the idea for American Dry Gin came from.”

Even with the decision to make Bluecoat a citrus-focused gin, it was decided there was still the need for consumer and trade feedback on early product developments.

“We narrowed all of our trails down to three favorites, and then sent those three samples out to literally everyone we knew,” Auwerda said.

“Out of the three, there was one that was unanimously the favorite. It got all the love, and we knew right then that this was it. This was Bluecoat.”

In 2017, Philadelphia Distilling opened the doors to a brand new, state-of-the art distillery and tasting room. It was created with two clear purposes in mind. The first, was to produce spirits at the highest quality and efficiency.

Head Distiller Aaron Seyla was involved in the planning from day one. To Auwerda, it made sense to have Seyla lay out the production side of the distillery, as he’d be the one working in it the most. As a result, Seyla was able to build out the distillery of his dreams.

“It’s been kind of surreal working in the space that I helped to lay out and build,” Seyla said. “That said, if something doesn’t work or goes wrong, it is my fault. I’ll happily accept the blame. It's better than working in a space that somebody else designed and laid out. Now, when I’m frustrated at something I’m working on, I can’t scream 'Why would they do this?' Instead, it’s 'Why did I do this?'”

Throughout the distillery, there are artifacts of Philadelphia scattered about. While some stand out, others go almost unnoticed, even though they are rather striking.

“All four of those wooden water tanks were built by hand by Hall-Woolford Tank Company right here in Philadelphia,” Auwerda said. “They’ve been making tanks like these for more than 164 years. The tanks sit on roofs and buildings across New York City’s skyline, but since no one in Philly has water tanks on their roof anymore, nobody knows about them.”

The second purpose of the new facility is to be an educational hub, cocktail lab and multisensory experience of the Bluecoat gin brand.

“It has been a huge benefit for us to have this facility,” Auwerda said. “It allows us to tell our story in an immersive way. Bartenders, distributor reps, and salespeople can come in and introduce customers to Bluecoat in a way that cannot be replaced outside of this room. They can sit here, try the product, while at the same time watch it being made right behind the bar.”

“We have a lot of people coming into the distillery,” Auwerda said. “Even if a tour is full, they can still sit and have a cocktail and feel like they’re a part of the distilling experience.

“We also get a lot of people that just come in here thinking that we're a cocktail bar, not knowing that we're a distillery. The look on their faces the first moment when they walk from the retail room into the cocktail room and then realize how big the space is and that it’s a full production facility… it's great to see.”

There’s one more use of the new facility, one that recalls secret meetings of underdog like-minded individuals who were looking to create change back in 18th century Philadelphia.

Every Presidents’ Day weekend, Philadelphia Distilling inducts new members into its not-so-secret society, the Sons and Daughters of Independence.

“Our goal is to highlight bartenders that are both great ambassadors of our brand, as well as advocates for the greater good of the community and industry,” Auwerda said. “Many of them are USBD chapter presidents who actively give back to their communities and are creating noticeable change in the lives of those they work with. We’ll bring them in and give them recognition, leadership training and help them further develop their tools.”

Philadelphia produces some legendary underdogs. The city’s working-class attitude crafts and hones them. Its east coast winters toughens them up and its revolutionary history instills in them a fighting spirit that burns deep in the soul of the “Birthplace of America.”

Philadelphia wears its underdog moniker proudly, pointing it out like a scar with a story to tell.

Philadelphia Distilling is the latest branch of the city’s underdog family tree. It is a distillery tucked away in the city’s northeast side in the shadow of I-95 between the edges of Fishtown and Northern Liberties. It is there where owner Andrew Auwerda and head distiller Aaron Selya are leading their own revolution for the hearts, minds and palates of the cocktail kingdom.

Founded in 2005, Philadelphia Distilling —and its core spirit, Bluecoat Gin —has grown right alongside the city’s emerging cocktail scene.

“The bartending community in Philadelphia embraced us quickly and helped us get going right when we were just getting started,” Auwerda said. “We benefited greatly from the cocktail renaissance, and vice versa. I'm not sure that either of us would be so successful without each other.”

He added, “It’s more interesting for a bartender to talk about Bluecoat Gin than it is, say, some British gin that's been around for 100 years. We have a local story that bartenders want to feel a part of.”

While the industry may have fully bought into Bluecoat, consumers on the other hand, are the battle Auwerda still doesn’t feel he’s won.

“It's shocking to me and refreshing, I should say, when I get out there and realize just how many people have never heard of Bluecoat,” Auwerda said. “It doesn’t matter if they’re from Philadelphia or not. Our name is still unknown. That's just the reality.” said Auwerda.

Auwerda and team have an uphill battle. For one, they’re competing against national brands that have greater name recognition, longer heritage and deeper pockets than Philadelphia Distilling does.

And then there is the fact that Philadelphia Distilling is trying to build its brand on the back of gin, a spirit that has unfairly been cast off by some consumers.

“A lot of people have had bad experiences with gin” Auwerda said. “It is understandable, as traditional dry gin can be a very divisive spirit.”

The cards are stacked up against them, but in true underdog fashion, Bluecoat has come prepared for the fight.

For starters, Bluecoat Gin doesn’t fit the flavor profile of a traditional London Dry Gin. Instead of going heavy on juniper, Bluecoat instead goes all in with sweet orange and lemon peels. The citrus notes make Bluecoat an almost juicy gin that is bright and zesty. That addition of citrus was a revolutionary industry first, and it sparked the beginning an entirely new gin style: American Dry.

Philadelphia Distilling has gone one step further on its quest to convert consumers into Bluecoat connoisseurs. In 2016, they opened a brand new 15,000-square foot distillery and bar. It is a temple of gin built with the sole purpose of changing the minds of the masses through education, immersive experiences and of course, gin cocktails.

“If you walk in and proclaim that you don’t like gin, we’re going to serve you a Bluecoat gimlet,” Auwerda said. “If you don't like that, then maybe you really don't like gin.

Most people, however, will take one sip and say, 'Oh my God, this is great,' and we're like 'Surprise! It's gin!'

“I wish we had a nickel every time somebody says, 'I really don't like gin, but I love Bluecoat,'” Auwerda said. “I feel like that's the mantra of our fan base.” 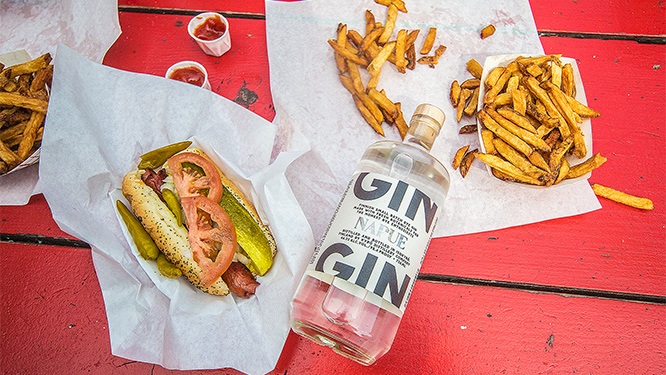 Kyrö is Out to Show America How Finland Does Rye 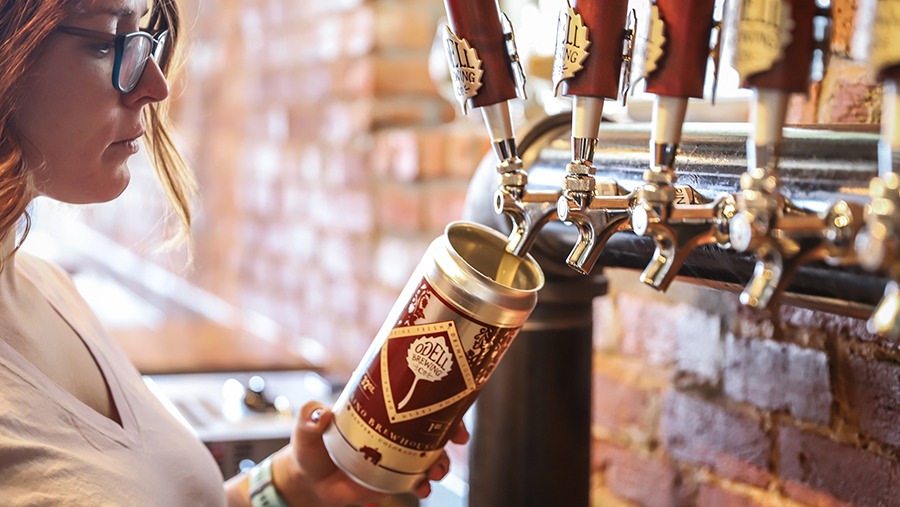