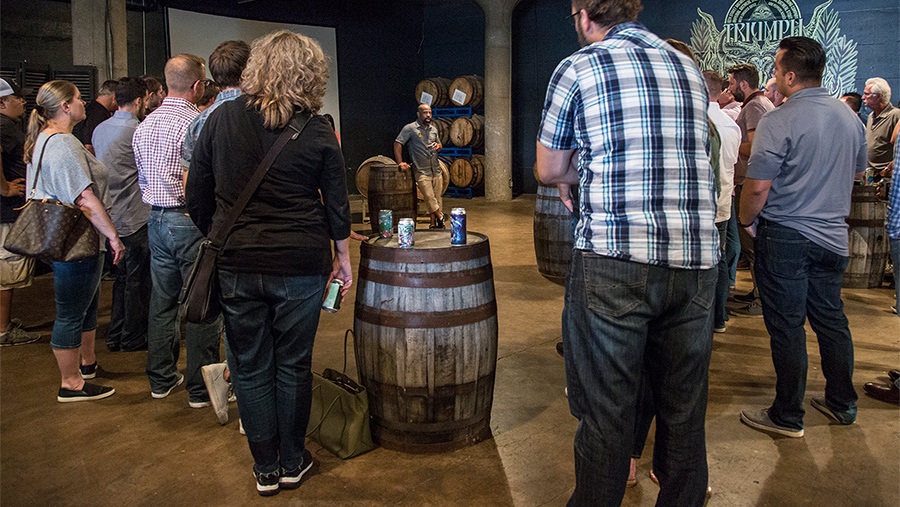 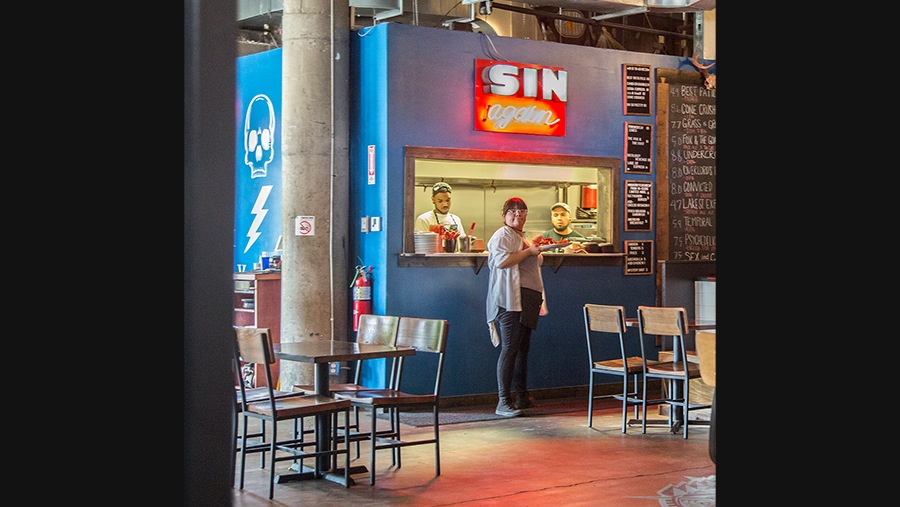 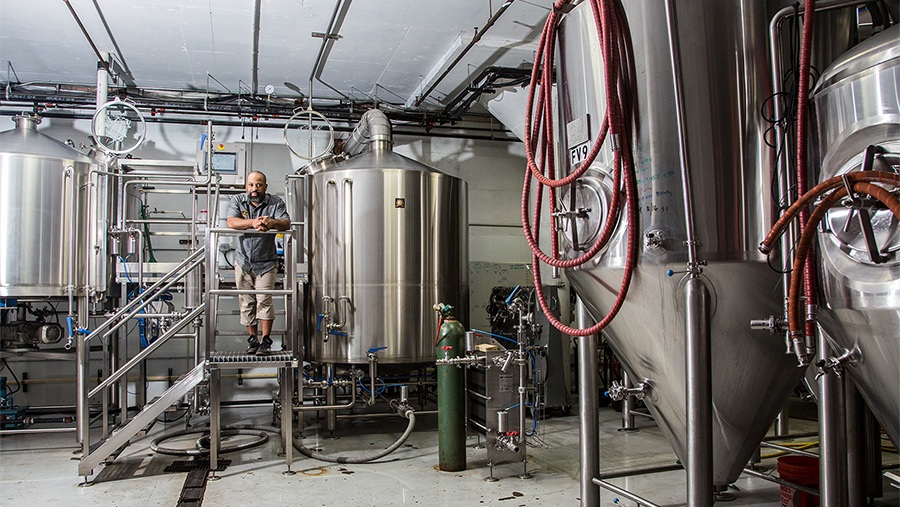 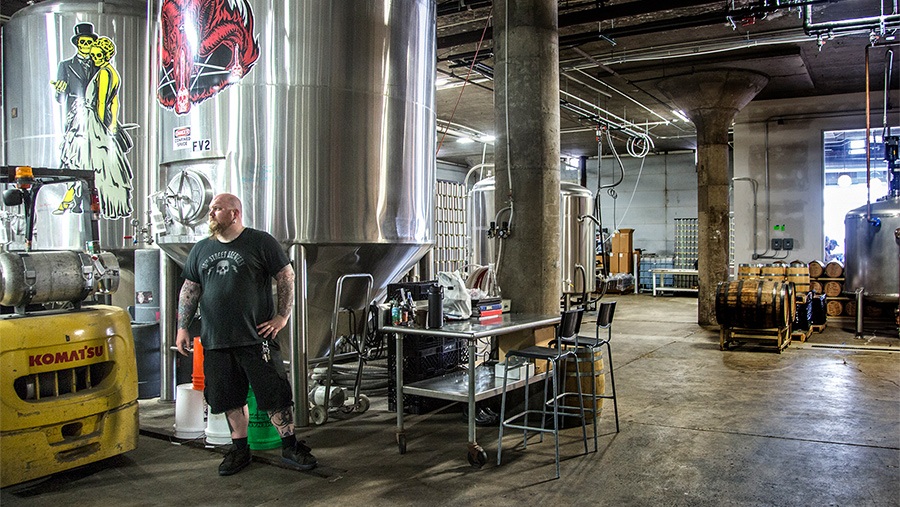 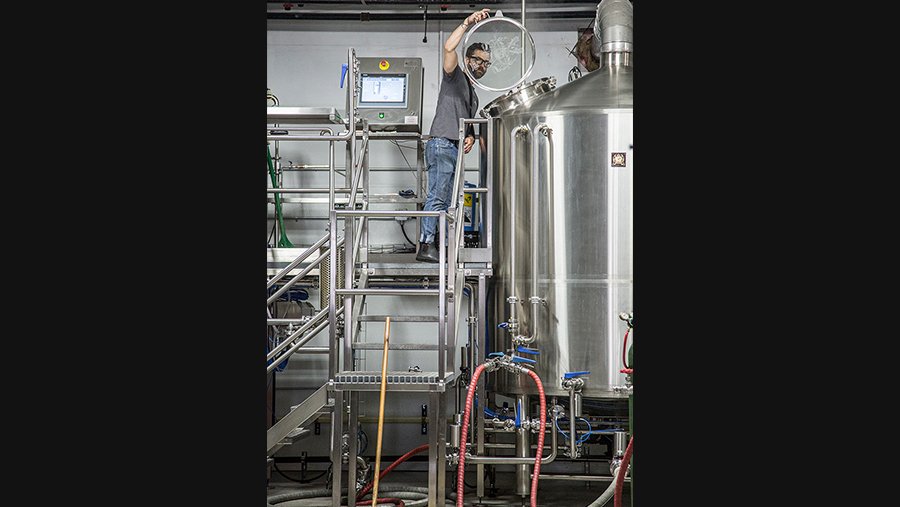 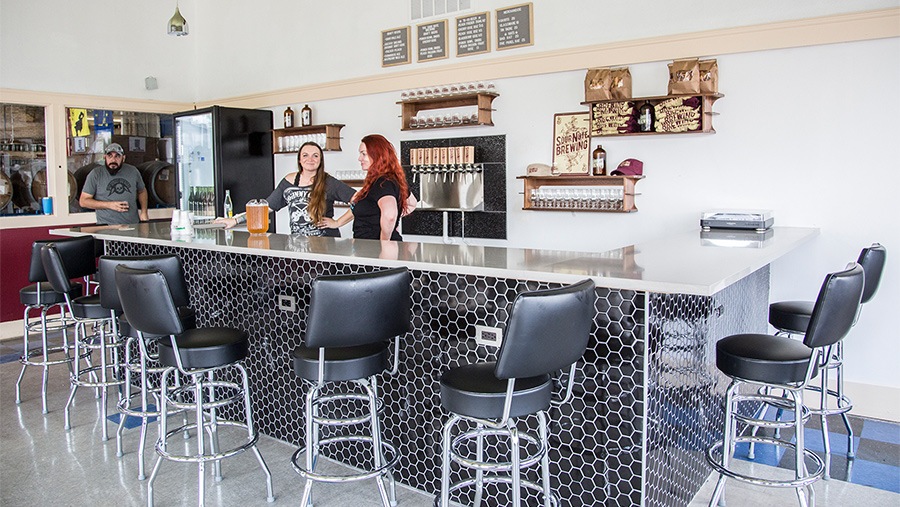 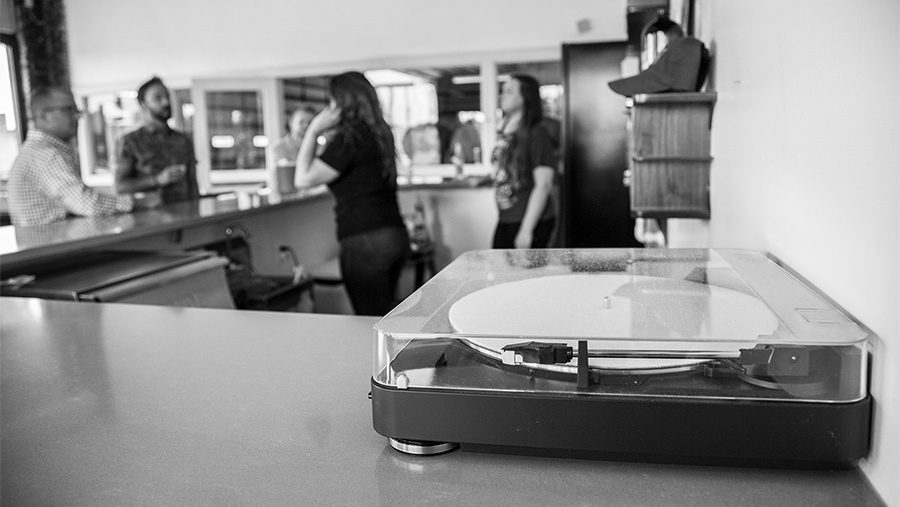 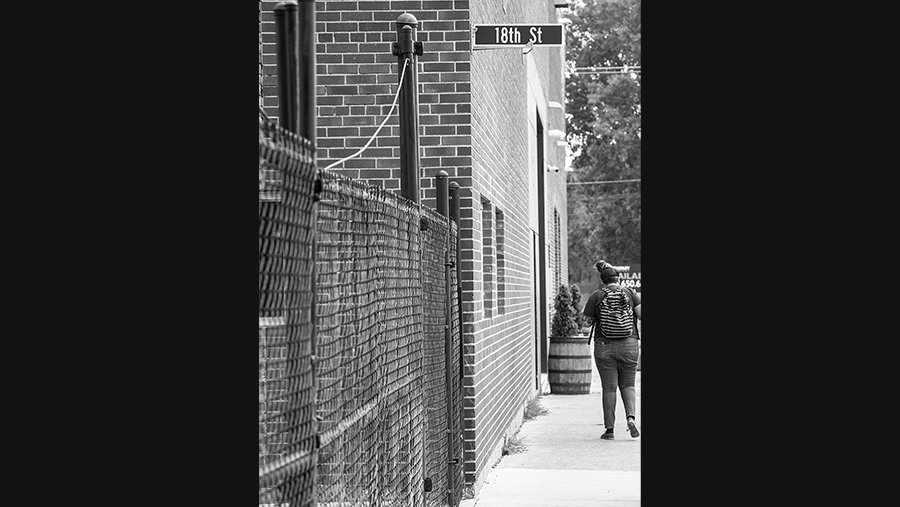 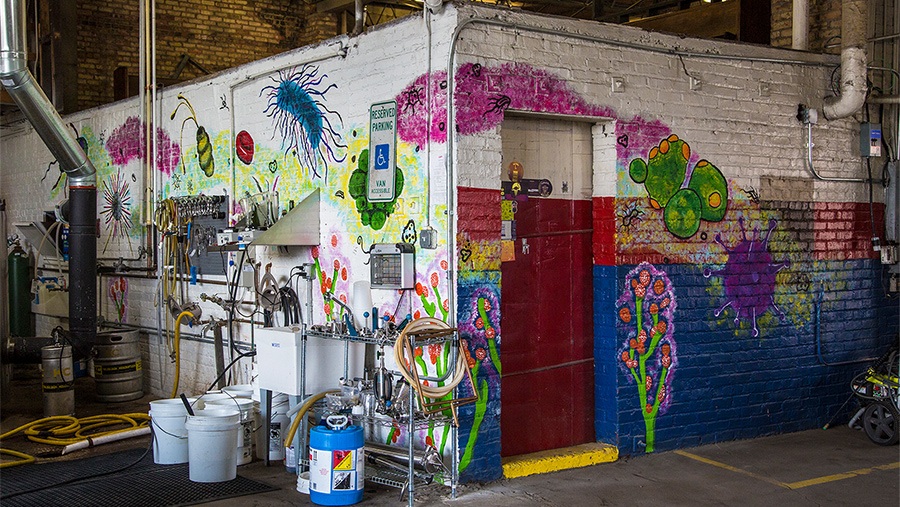 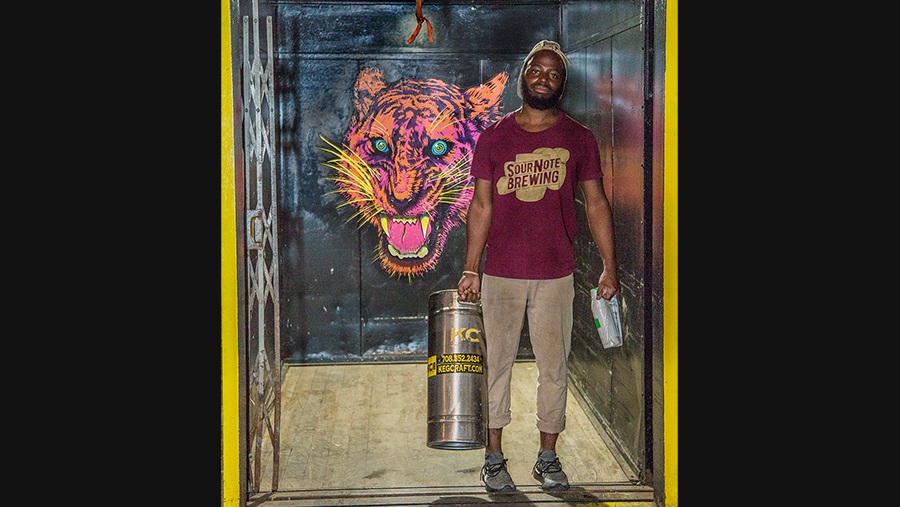 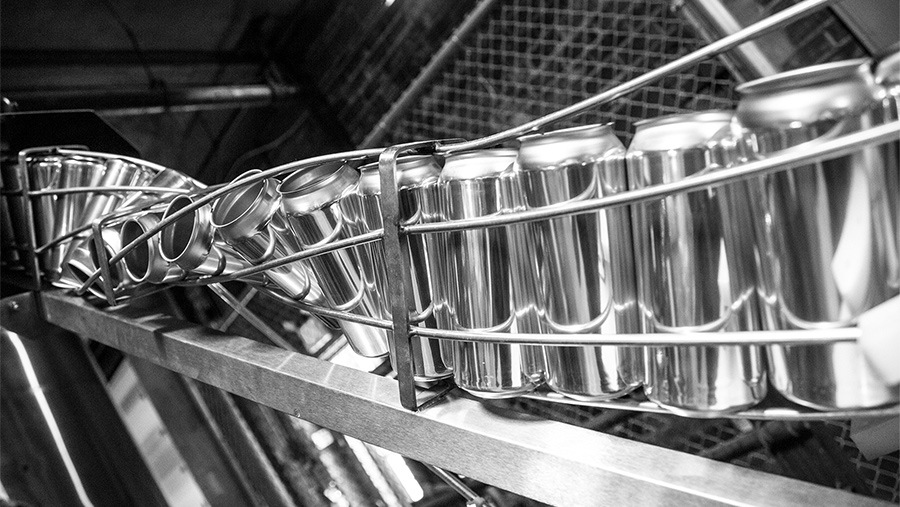 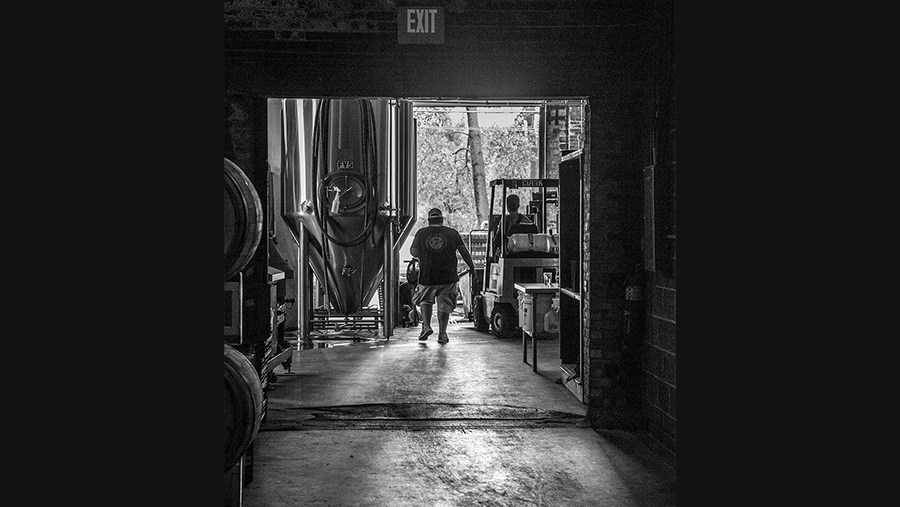 18th Street Brewery founder Drew Fox is a “big music person.” He has been his entire life.

He grew up Baptist and singing in the choir was part of life. But his taste in music differed as he got older. He traded in his church hymnals for metal music guitar solos, and that influence has permeated who he is.

“Music was a way for me to either escape or take a different path in life,” Fox said. “And my path is usually what differs.”

Walking a different path is what led to the birth of 18th Street Brewery. Fox discovered the varying spectrums of beer during a trip to Belgium and when he learned how to brew his own beers, Fox decided that was it for him.

“I could be a corporate guy all my life, or I can do something that would at least bring me some sort of happiness,” Fox said.

If a beer lover is searching for happiness, then 18th Street is nirvana. With more beers in its history than there have been presidents in office, 18th Street offers something for everyone.

That’s because the brewery wouldn’t be what it is without everyone involved — from the brewers to the canners to the Indiana locals who stop by for a pint after work.

“Craft beer to me is about community,” Fox said. “It’s about sitting at your local bar and sharing a conversation with individuals over beer.”

18th Street has a mentality that is very much about living local. It has a staff of 48, split between its Gary and Hammond locations, and 100% of them call Indiana home.

The towns are separate but together, they boast a successful brand built by passionate people who know “the beer is bigger than life.”

And a good beer can’t be brewed without hard work.

“No one is bigger than 18th Street in our family,” Fox said. “Hard work and dedication doesn’t stop. It’s important to me that work ethic carries on.”

The results of 18th Street’s work ethic can be heard in the buzz surrounding its beers and it’s hoping that’s enough to quietly turn Indiana into a potential craft beer mecca.

That kind of hidden potential is what made the decision to make Indiana the brewery’s home a conscious one. Fox looked at Gary’s falling infrastructure and saw that “no one really cared.”

Fox credits his desire to bring more opportunities to Indiana to his grandfather, the first African-American bricklayer and the “hardest-working man” Fox has ever come across.

Fox saw a problem in Indiana and with the drive he inherited from his grandfather, sought out to fix it.

“My grandfather was a tough dude,” Fox said. “He didn’t take anything from anybody, so we kind of grew up around that tough attitude.”

During his first few years in Indiana, Fox encountered his fair share of nonbelievers.

“When we moved to Gary, people were like, ‘Oh my god, he’s going to fail in a year. He’ll never survive there,’” Fox said.

But almost a decade and a lifetime worth of beers later, 18th Street is doing a victory lap for the skeptics. The brewery is buying building after building to keep up with demand, and it’s venturing into sour beers under a name that’s distinct from 18th Street: Sour Note Brewing.

As someone who walks his own path and strays toward the eccentric, Fox’s gamble on sour beers was intrinsic: it was a market no one was touching.

He likens Sour Note Brewing as having the same mentality as the Indiana breweries that are already making “amazing sours.”

“I think they’re kind of like us. They’re like, ‘Alright, we have this thing and it’s good because no one else is doing it,’” Fox said. “It’s aciduric, it’s different, it’s nuanced.”

“They’re kind of like us” is the sort of hometown pride 18th Street is striving for. Fox sees other breweries and beer makers not as competition, but as part of the community.

For places like Gary and Hammond, that sense of community and camaraderie is what the beer industry is all about.

“The beer is not bigger than any one of us in this whole room,” Fox said. “That is the power of what we do.”

18th Street Brewery is, at its core, a brewery.

But the moment you step into its Hammond, Indiana facility, you can tell it’s much more than that. The vibe is apparent: a snake mural embeds the walls and dense basslines electrify the speakers.

“It’s always beer first, music second, art third. That's our culture,” Fox said. “We try to live it, try to breathe it, as best as we can.”

The brewery and its energy are characteristically Fox. When the Chicago, Illinois native first started the business in 2010, he had a vision. Fox loves metal music, and he draws inspiration and motivation from it.

“A lot of it was just in my head. I knew exactly what I wanted it to look like,” he said. “The metal sounds make you want to get up and just go.”

Despite the 100-plus potential beer names Fox has in his back pocket, the visuals and sounds are always meant to complement the beer. 18th Street’s top priority is to brew beer that’s worthy of the rock-n-roll stamping it’s known for.

"We like to keep things moving, keep things fresh, take some risks, have some fun."
- Drew Fox, Founder of 18th St. Brewery

“You can put any imagery on any beer,” Fox said. “But if the beer’s not good, it does no justice to the inventory.”

And 18th Street’s inventory has come a long way since Fox’s homebrewing days, where he converted a carport behind his house into an “elaborate facility to brew beer.”

The makeshift brewery was the birthplace of some of 18th Street biggest fan favorites. Oh, So Pretty and Hunter call that carport home and they serve as two of the more popular beers in 18th Street’s arsenal.

“Those were the first two beers that I was like, “Hey, I can do this.’” Fox said.

While 18th Street already has a beer menu that’s brewed to perfection, Fox and his team know stopping there isn’t an option.

“We like to keep things moving, keep things fresh, take some risks, have some fun,” Fox said. “That's what we do.” 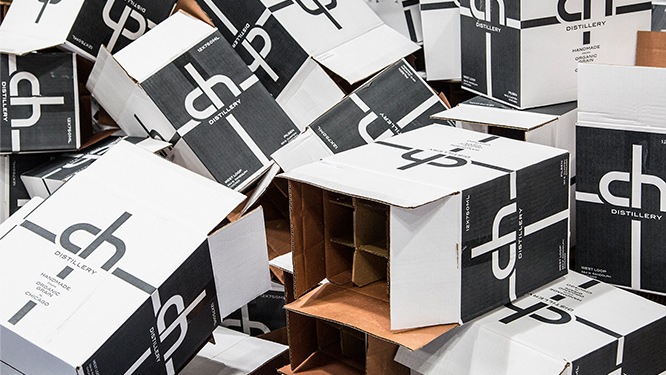